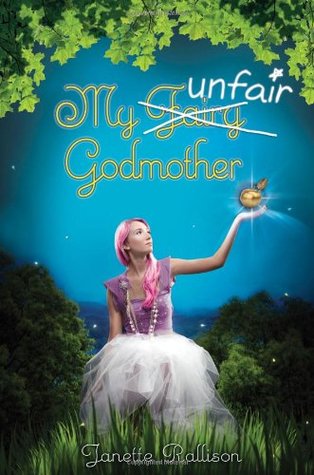 Synopsis (from Amazon):
Tansy Miller has always felt that her divorced father has never had enough time for her. But mistakenly getting caught on the wrong side of the law wasn’t exactly how she wanted to get his attention. Enter Chrysanthemum “Chrissy” Everstar, Tansy’s fairy in shining, er, high heels. Chrissy is only a fair godmother, of course, so Tansy’s three wishes don’t exactly go according to plan. And if bringing Robin Hood to the twenty-first century isn’t bad enough for Tansy, being transported back to the Middle Ages to deal with Rumpelstiltskin certainly is. She’ll need the help of her blended family, her wits, and especially the cute police chief ‘s son to stop the gold-spinning story from spinning wildly out of control. Janette Rallison pulls out all the stops in this fresh, fun-filled follow-up to the popular My Fair Godmother.

Review:
While having a fairy tale feeling, Tansy is very much a unique character. She feels what most who experience parents that split up do, and while she knows she isn’t behaving the best, she does want to fix her problems. Due to the way Chrissy’s “gift” wishes turn out, Tansy finds herself examining what she thought she liked and wanted, and if that’s really what would really make her happy, and how her situation is compared to others.