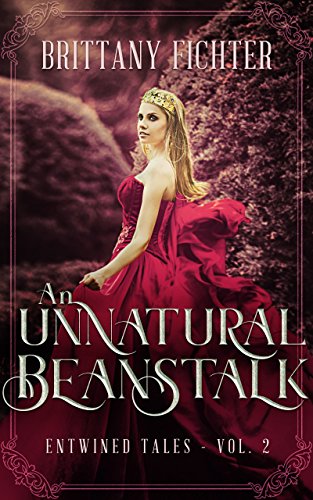 Synopsis (from Amazon):
Some fairies ruin everything.

Eva never doubted her place in her happy little world. Born second to a former woodcutters-turned-wealthy merchants’ family, all she ever wanted was to care for her siblings and to play the harp. Unfortunately, when her fairy godfather’s gift-giving goes awry, Eva receives an unusual talent that gets her abducted and betrothed to a loathsome duke with giant plans for the kingdom.

Jack never ventured far from his mother’s farm. But when Eva’s fairy godfather, in an attempt to fix his goddaughter’s plight, forces Jack to take some magic beans and responsibility for saving Eva, Jack finds himself in as much danger as the girl he came to save.

In this retelling of Jack and the Beanstalk, follow Jack and Eva as they attempt to outsmart the duke, save the kingdom, and just possibly find their own happily ever after as well.

An Unnatural Beanstalk is a romantic fairy tale novella. It can be read on its own but is more fun when read as a part of the Entwined Tales, a series of interconnected fairy tales by six different authors. Each story follows the adventures of one of seven children from the same family as they seek out their own happily ever afters in spite of their reluctant fairy-godfather.

Review:
Eva has a wonderful ability to play the harp that she’s worked hard to master and get good at. When someone ends up in a bad situation, she cannot help but offer to help, and that causes her fairy godfather to “reward” her.  While Eva’s family life is unconventional, Jack’s is too. Finding Jack and Eva’s stories entwining is amusing and endearing as both go through unique trials and tribulations in their attempt to free Eva. Unique, it’s good to see Eva realize that just because she isn’t the exact size and shape that is considered most desirable, doesn’t mean she ISN’T a desirable and capable woman.