Life’s not a fairy tale, and princes don’t fall for bookish virgins like me. 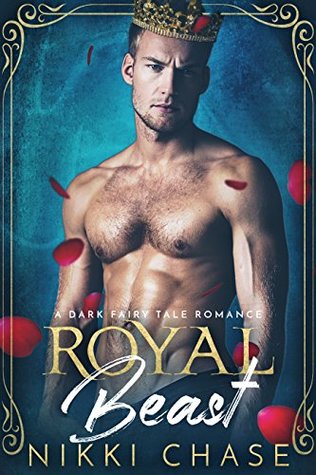 I didn’t know about the secret palace in the woods. Not until I held a stolen rose from its gardens.

A tall, dark, and mysterious man lives within the palace. He’s known across the kingdom as the royal beast. They say he’s a monster.

He also happens to be the crown prince.

As punishment for my crime, the prince orders me to spend one month as his prisoner.

But instead of throwing me into the dungeon, he whisks me into his bedchamber. The arrogant bastard says he’ll make me beg to give up my virginity.

I tell him there’s no way in hell that’s happening, of course.

He’s the freaking crown prince, and I’m just a girl from a provincial town in the middle of nowhere. We don’t belong together. That’s obvious.

But somehow he knows about my dark, secret desires. All he has to do is speak in that low, dominant voice, and I melt into a submissive puddle. Despite my reservations, I find myself wanting to surrender my virgin body to the prince—and my heart, too.

I really should stay away. But being punished has never felt so good.

Review:
I wasn’t certain I was going to like this novel when I began. The opening was brash, and I think it would have been much better to keep that bit where it belonged in the time line, versus having it being so jolting at the beginning with no idea what’s going on. Because of the opening, I was quite jarred by the language, and it took a few pages for me to figure out the time period they were supposed to be in– something that could have been a gradual understanding if the book hadn’t had the prologue.

Once I was situated in the story, I found myself quite intrigued. The Royal Beast isn’t your typical beast, and his story isn’t just that of him being cursed. Both the beast and Rosemary have a nice depth and I enjoyed the way their other interests played into the story. This book was definitely a romance novel, full of a decent amount of D/s style elements.

If you’re looking for some hardcore romance with a hint of a fairy tale, you’d likely enjoy this book.

Author Biography: (From Amazon)
Nikki Chase is a best-selling author of contemporary romance that features bad-boy heroes and kick-*ss heroines. She derives some kind of sick pleasure from putting her characters in impossible situations where they have to struggle to find their happily ever afters.

Gib and the Gray Ghost

Gib Whittaker is leaving the Lovell House Orphanage for the second time in his young life. He’s going back to live with the Thornton family, who are free to take him in again now that Mr. Thornton has died. Life has changed on the old ranch, and Gib can go to school. But he’s still doing all the chores in the barn and stable. He’s not exactly farmed-out labor anymore, but will he be adopted for real this time?

Luckily Gib has his beloved horses to care for, especially the beautiful thoroughbred, Black Silk. Then one day a strange horse gallops in out of a snowstorm, a handsome dapple-gray who has been severely whipped and starved. He’s frightened and dangerous. Gib knows he must find some way to save this magnificent horse — and in the attempt, he finds one place where he will always belong.

Review:
If you have or know of a young reader who loves horses, this book was definitely geared towards them. Gib faces some difficult challenges in this book, both with horses and with finding his own place in the world.There were some points where I thought the author should have spent a bit more time explaining horse terms, since I doubt the target audience will be switching to a dictionary to figure it out. Despite that, I quite enjoyed all the horses, and the talk of various bits and how to get them to behave. When Gib was giving Livy riding lessons, it would have been nice to have more context about what he told her to do.

All in all I quite enjoyed the story. It was a nice read without too many big words, something that I would recommend for elementary school kids, or preteens/teens that maybe aren’t into reading, but are into horses.

Author Biography: (From Wikipedia)
Zilpha Keatley Snyder was an American author of books for children and young adults. Three of Snyder’s works were named Newbery Honor books: The Egypt Game, The Headless Cupid and The Witches of Worm.

The highly acclaimed first book of a fantasy adventure series set in a mysterious forest, starring a daring new hero.

“Readers will thrill to journey with Jinx” (SLJ, starred review), a wizard’s apprentice, as he sets off on a quest through the dangerous Urwald, a magical forest full of wizards and were-creatures, and discovers that it is more complex than he could imagine, and that it needs him more than he could ever guess.

This humorous and smart tween fantasy adventure is perfect for fans of Septimus Heap, The Sisters Grimm, and Fablehaven.

Review:
This story is magical.  I am so glad that this book is the first in a series because as I got further and further along I was really worried that I wouldn’t get to continue on and learn more about Jinx’s life.  The Urwald is perfect.  Simon is the perfect differentiation from Jinx’s stepparents.  Jinx is refreshing and unique without shoving anything in your face.  The characters are gripping, the plot is intriguing, and I found myself less and less willing to set the book aside.  I definitely think this book is along the lines of Howl’s Moving Castle but this book has such unique qualities that it’s hard to compare it to anything.  The magic seen is new, refreshing, and interesting.  Everything you thought you might have known about magic and magical creatures might be right, or it might be turned on its head, depending on the person.  There are great morals, and it’s overall an amazing book.

Author Information: (From Amazon)
Sage Blackwood was born in Chicago and grew up in New York State. She graduated from Antioch College and the University at Albany, and taught ESL for many years. Her first fantasy novel, JINX, was selected as a Best Book of 2013 by Kirkus, Booklist, School Library Journal, and Amazon.