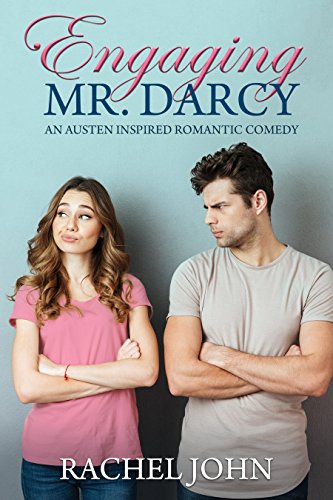 After a standoff in the pizza parlor, Elsie Bennet has decided Fitzwilliam “I-Throw-Fitz” Darcy is the worst customer she’s ever encountered. Also the best looking, but that’s beside the point. She’s horrified to discover Will is not just passing through her small town, he’s her new neighbor.

Will Darcy has all the money and time he could ask for, and yet life never seems to meet his expectations. When his best friend, Charlie, starts dating Jane Bennet, Will becomes their unhappy third-wheel. The solution? Bring along Jane’s sister, Elsie, a girl who challenges him, makes him laugh, plagues his thoughts, and unfortunately, hates his guts.

Will might control a lot of things, but he won’t control her. Elsie’s already been warned away by her new friend, Jeff Wickham, who found out the hard way that Will is not someone to be crossed. Things would be so much simpler if she was attracted to Jeff. But she’s not. She’s attracted to Will, and the tug-o-war between her mind and her heart is going to drive her mad.

A modern day take on Pride and Prejudice with all the characters you know and love.

Review:
This is probably one of my favourite modern day versions of Pride and Prejudice, after The Lizzie Bennet Diaries. This is an original take in which Jane and Elsie actually work and help support their parents. Jane is as kind and practical as ever, and Elsie is, as our Elizabeth/Lizzy always is– feisty, hot tempered, and perfect.

The twist on what Jeff did to Will’s sister was definitely not something I’d anticipated, but I found that it really added an extra layer and depth to the story. Like every version of the story, I hated Caroline. I also really liked how Charlie seemed intelligent about business, but completely hopeless about romance. While Darcy is ever a snob, it was neat to see him trying to give Charlie the right idea of what to do to not be a massive jerk.

The whole Jeff/Darcy thing was really well done, and what Jeff did to Lydia was quite genius too. It never would have occurred to me to put together the events that Rachel John did, and I think that altogether, this book is definitely on my top Pride and Prejudice retellings list. I highly recommend!