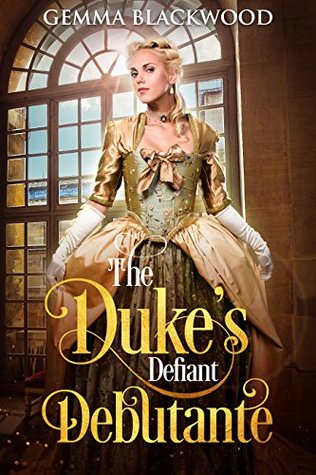 Synopsis (from Amazon):
The reclusive Duke of Redhaven is not somebody to be trifled with.

Fortunately, neither is Miss Angelica Stirling.

Lively, clever, and rather too outspoken, Angelica does not have high hopes for her first London Season… not that she particularly cares. Who needs a husband when you have a good book?

When she receives a surprise proposal from Edward Thorne, Duke of Redhaven, it seems too good to be true. And it is.

The Duke is handsome, mysterious, and brooding – and everything Angelica doesn’t want in a husband. Is one of the biggest fortunes in England really worth the trouble?

Edward returns to London after a decade’s self-imposed exile in need of one thing: a bride. But his strategy of proposing to the first agreeable-looking girl he meets backfires spectacularly. Angelica is anything but the docile debutante he took her for.

Before long, Edward is facing a predicament he never imagined. Angelica has run away from London – and she’s taken his heart with her.

Review:
I absolutely adored Angelica as a protagonist. She’s spirited, opinionated, and not exactly willing to do what society deems acceptable just because that’s what is considered proper. Angelica’s biggest issue is trusting those she shouldn’t, which blows up spectacularly.

While I enjoyed the story, I did think that the melodrama could have been easily avoided had Angelica talked to Edward instead of taking flight, especially believing the word of someone that so far she had no reason to trust and didn’t actually know, except that there was something between he and her betrothed.