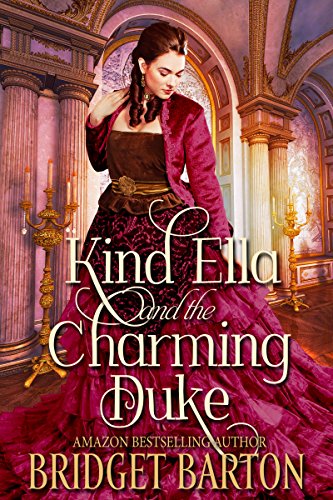 Synopsis (from Amazon):
Following the death of her beloved father, Ella Winfield is devastated when her mother, a woman with untamed social aspirations, hastily marries the Earl of Dandridge. He is a humorless man, and one whom Ella does not trust for a moment. Leaving her beloved Longton Manor behind, Ella is cast adrift in the large and unwelcoming Dandridge Hall, despite her desperate plea that her mother need not marry at all.

The Earl’s daughters, Lady Patience and Lady Georgiana, are spoiled and manner less young ladies, used to their own way in all things and fiercely competitive with one another. But when the Duke of Hillington is reported to be searching for a suitable bride, the tension between the sisters reaches new heights. With Ella’s simple beauty, intelligence, and fine manners, the Earl seeks to hide her away from the world and, more importantly, the Duke of Hillington himself.

When he determines that Ella not attend a masquerade ball to which the whole family has been invited, Ella takes it upon herself to attend in disguise and spy on the ambitious little family for her own amusement. When she finds herself in anonymous conversation with the Duke himself, she realizes that there is more to him than a man who would seek nothing more than a pretty bride with a large dowry. He is open and amusing and she finds herself quite captivated.

Rufus Darnley, the Duke of Hillington, cannot shake from his mind the curious and exciting young woman who appeared at his masquerade ball uninvited, and he can no longer find any enthusiasm for his search for a wife with whom he might provide an heir to the Duchy. When he finds the discarded mask of the mysterious woman who left the ball without a word, he holds on to the hope that he might one day discover her true identity.

As the Earl of Dandridge plots the most appalling schemes to keep the Duke interested in his own daughters, Ella Winfield must do what she can to stop the man she is fast becoming attracted to from being steered in the direction of either Lady Patience or Lady Georgiana, all without being discovered by the family who have, one by one, turned their backs upon her.

Review:
This book shows that kindness can go a long way, but so can cruelty. Part of what makes the Duke realize there is something about Ella is that she is so excluded from family life. In the end it is both Ella’s meek nature, but also her intelligence and curiosity that draw the Duke in. I found the book both shocking, sad, and heartbreaking at times. It was a book that really grasped me and pulled me in, and I quite enjoyed it.