Loved by the Dragon: A Dragon Shifter Paranormal Romance
Dawn of the Dragons Book 1
By Vivienne Savage 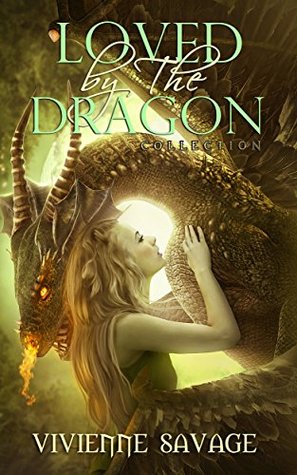 Two complete stories/No cliffhanger/120,000 words/Adult content/PROFANITY
Author’s Note: Be prepared for kinky sex and bad language. Originally published as Saved by the Dragon, Mated by the Dragon, and Taming the Dragon.

Chloe’s weekend getaway doesn’t go according to plan when she’s trapped in a cave with a gorgeous, golden-eyed rescuer named Saul. His fiery secret and a hot, one-night stand will set in motion events able to change her life forever — but all dragons aren’t ready to accept mortalkind. As shadowy forces in the draconic world object to their new union, Chloe must find the strength to fight for a future with the man she holds dear.

When Marceline Vargas agrees to join her friend Chloe for an island vacation in Mexico, she’s ready for fun in the sun and an escape from her hectic career. After crossing paths with the resort’s owner, she soon discovers the billionaire dragon shifter is a charismatic enigma — sexist but kind-hearted, intimidating yet generous. Can his chauvinistic patterns be tamed? Marcy intends to find out.

Review:
Chloe and Saul’s story is so sweet and nice. You can’t help but hope that Chloe will come around. While I understand that part of the big climax was to introduce other characters for the following books, I thought it was a bit annoying/unrealistic. The language used in this book is very different from Savage’s usual language when writing romance, and I don’t particularly care for the word choice.

Marceline and her billionaire shifter friend I didn’t find as endearing because it seemed a bit too contrived and forced. Could he not have pushed forward during the time they were apart to try to explain, or is it just because time is so different for dragons?

I did like these stories, but I prefer Savage’s fairy tale romances personally.

Author Biography: (From Amazon)
Sign up at http://www.viviennesavage.com/newsletter to receive an exclusive, free novel.

Vivienne Savage is the pen name of two best friends who write everything together. One works as a nurse in a rural healthcare home in Texas, and the other is a U.S. Navy veteran. Both are mothers to two darling boys and two amazing girls. When they aren’t raising children, writing fantasy, or concocting ways for shapeshifters and humans to find their match, they play online RPG games to pass the time.