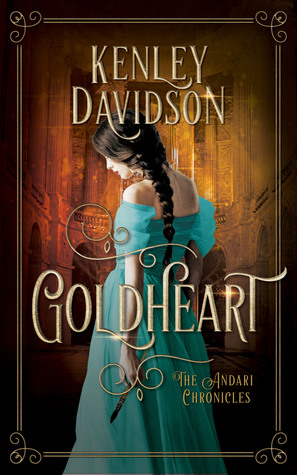 Sometimes, spinning straw into gold is the easy part…

Elaine Westover is the last person you’d expect to find locked in an attic… again. A shy but brilliant artist, Elaine wants only to paint in peace, but is forced to accept a commission from a wealthy client in order to save her family home.

Her client proves to be as powerful as he is rich, and after a chilling encounter reveals his twisted ambitions, Elaine refuses the job. That is, until he imprisons her and threatens to destroy everything she loves unless she meets his demands.

Held captive in a house haunted by tragedy and despair, Elaine fears that neither her courage nor her abilities can save her from her fate. To defeat her captor and win back her freedom, Elaine must accept the aid of a mysterious stranger, who may be hiding his own reasons for wanting her to stay.

Goldheart is the second book in The Andari Chronicles, a series of interconnected fairy tale retellings that evoke the glittering romance of the originals, while infusing them with grit, humor, and a cast of captivating new characters.

Review:
Elaine’s innocence and uncertainty in what’s appropriate in life is realistic and refreshing from all the stories with similar attempted heroines. While I thought the connections between some characters were a bit obvious (though it was supposed to be foreshadowing) that didn’t at all deter me from enjoying the story entirely. The story was inspired by Rumpelstiltskin to be sure, but the gold looked for here is entirely different from any version I’ve seen before. This unique story is one I quite enjoyed, and would certainly recommend to others.

Author Biography: (From Amazon)
Kenley Davidson is an incurable introvert who took up writing to make space for all the untold stories in her head. She loves rain, roller-coasters, coffee and happy endings, and is somewhat addicted to researching random facts and reading the dictionary (which she promises is way more fun than it sounds). A majority of her time is spent being mom to two kids and two dogs while inventing reasons not to do laundry (most of which seem to involve books).

Kenley is the author of The Andari Chronicles, an interconnected series of fairy tale retellings, and Conclave Worlds, a romantic science fiction series.