A Goose Girl: A Retelling of The Goose Girl
Entwined Tales: Book 1
By K. M. Shea 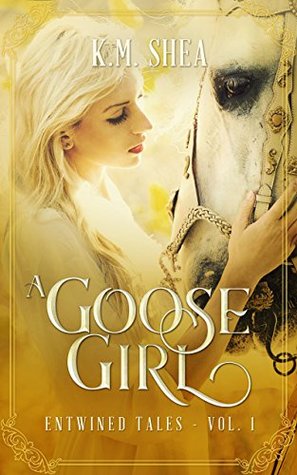 As a royal lady’s maid, Rynn has one task: Escort the princess of Astoria to her intended’s kingdom and return home. Unfortunately for the former goose girl, the princess has other plans.

When her charge flees, Rynn’s not only forced to take the princess’s place, but she must also contend with a spiteful fairy horse, a good dose of political intrigue, and Conrad…the mysterious and all-too observant lord who consumes more of her thoughts than he should.

But with war looming on the horizon, Rynn stands to lose more than her heart. Can she convince the princess to return, end the charade, and make peace between the kingdoms?

More importantly, can she possibly avoid a death sentence when the truth is revealed?

A Goose Girl is a romantic fairy tale novella. It can be read on its own but is more fun when read as a part of the Entwined Tales, a series of interconnected fairy tales by six different authors. Each story follows the adventures of one of seven children from the same family as they seek out their own happily ever afters in spite of their reluctant fairy-godfather.

Review:
Wow. This book was fabulous. The characters had such depth and there was such a unique plot line in place. I thought I might have had an idea what was going to happen since I knew the original story, but I was nowhere near close. While the Princess is infuriating, Rynn is a very relatable character. Acting aside, one cannot help but absolutely love the royal family, and how Rynn infiltrates what could be a dastardly war.

Author Biography: (From Amazon)
K. M. Shea is a fantasy-romance author who never quite grew out of adventure books or fairy tales, and still searches closets in hopes of stumbling into Narnia. She is addicted to sweet romances, witty characters, and happy endings.

She is also extremely committed to her readers—who have set up their base camp at kmshea.com—and lives in the idyllic Midwest with her furry pet, Perfect Dog.