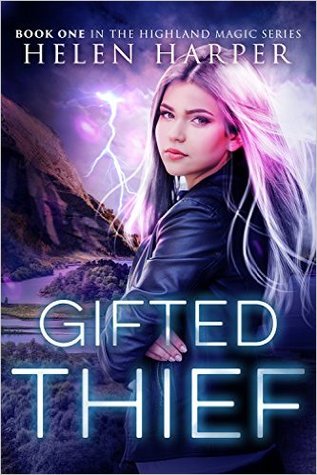 Since the moment I was ripped from my mother’s womb, I’ve been an outcast amongst my own kind. The Sidhe might possess magical Gifts, unbelievable wealth and unfathomable power but I don’t want a thing to do with them. I ran away from their lands in the Highlands of Scotland when I was eleven years old and I’ve never looked back. I don’t need a Clan. I’ve got my own family of highly skilled thieves who mean more to me than any Sidhe ever could.

Unfortunately for me, the playboy heir to the Moncrieffe Clan has something I desperately need. To get it back, I’m going to have to plunge myself back into that world, no matter what the consequences may be. I suppose it’s just as well I have sense of humour. I think I’m going to need it.

Review:
Perhaps I was too lost in The Lazy Girl’s Guide to Magic world because I found this hard to get into. While the setup wasn’t bad, it took me quite a while to feel connected with the story.

I enjoyed Integrity’s determination and loyalty to her morals and her family. She’s a good heroine that’s easy to empathize with. I found the secondary characters equally amusing. Although some might find that they treat each other callously, I thought the way her real family interacts was realistic.

It was frustrating that at one point she gained great leverage, but then did nothing with it– it was as if it only mattered for that one chapter. While it served to bring forward other things, it was annoying to not see more happen because of it.

Towards the end I started to become more invested in the novel, but it seemed over too soon, with nothing truly resolved. A good set up for the next book, but not exactly satisfying. Although it may seem there are a decent number of pages in the book, the end of the book is a preview of the next in the series.

I plan to read the entire series, but I do not think it’s on par with The Lazy Girl’s Guide to Magic. Slow to start, but once I became involved, I looked forward to seeing what else might happen.