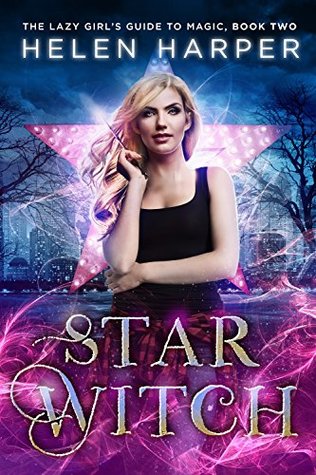 Ivy Wilde, the laziest witch in the West, is still entangled with the Hallowed Order of Magical Enlightenment. That’s not a bad thing, however, because it gives her plenty of excuses to spend more time with sapphire eyed Raphael Winter, her supposed nemesis. And when he comes knocking because he needs her to spy on the latest series of Enchantment, she jumps at the chance. Hanging around a film set can’t be hard … or dangerous … right?

Review:
The relationships in this novel were spot on! Not just Ivy and Rafe, but the interactions between all the characters were realistic and believable. Seeing Ivy thrown into an uncomfortable situation and need to adapt while Rafe stays nearby, their reactions to each other gave as much entertainment as the reality show bits they were supposed to be enthralled with.

I didn’t see this coming, her going on the television show that had been hinted about in the first book, but once more was learned about the television show, how it was essentially survivor meets people needing to use magic, it sounds like something I would also want to watch. Because of this reality television section, the mysteries were multiplied, and I am not ashamed to admit that I hadn’t figured out who it was before the reveal.

Like any book series, I do have a favourite character. While I empathize with Ivy, wanting to get results without work (who wouldn’t want to do that?!) I LOVE Brutus.

I loved this second book, and I couldn’t wait to read the next in the series! It’s a great series, and one I highly recommend!