Twice Upon a Time
Unfinished Fairy Tales 2
By Aya Ling 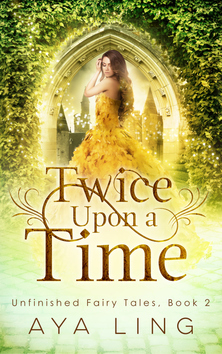 Seven years have passed since Kat left Athelia. Through the intervention of the goblin king’s baby daughter, the book is re-opened and Kat is transported back to Story World. Upon learning she is given a second chance, Edward is determined not to let her go this time. His chance of succeeding, however, seems like nil. Kat doesn’t remember anything of their past, she loathes life at court, and she’s anxious to return to the modern world. Not to mention that there’s a price to pay for tampering with the book again…

Review:
Half of the book was stupendous, where we anxiously sit on the edge of our seats, wanting nothing more than for Kat to remember who she was, and to be happy finally being with Edward again. While Edward and Kat anxiously fight to have their happily ever after, having gotten to know each other deeply, Bianca threatens to spoil everything for them.

Edward and Kat worked together to lead a new life for the people of Athelia, based greatly upon Kat’s views of modern day American society. Through working together, and getting to know how the other things, and their interests, they became far more intimate than they had in the previous full length novel, something I had mentioned wanting to see. Although I really liked the opening of the novel, it seemed quite harsh to leave Kat and Edward as they were in the end.

Author Biography: (From Amazon)
Aya is from Taiwan, where she struggles daily to contain her obsession with mouthwatering and unhealthy foods. Often she will devour a good book instead. Her favorite books include martial arts romances, fairy tale retellings, high fantasy, cozy mysteries, and manga.She is currently working on Ever After, Book 3 in the Unfinished Fairy Tales series, to be released in 2017. For exclusive bonus scenes, giveaways, and new release info, visit ayaling.com