The Last Necromancer
The Ministry of Curiosities Book 1
By C. J. Archer 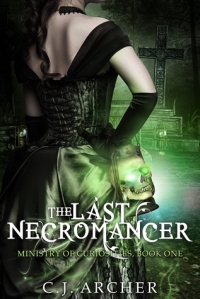 For five years, Charlotte (Charlie) Holloway has lived as a boy in the slums. But when one theft too many gets her arrested, her only means of escape lies with a dead man. Charlie hasn’t raised a spirit since she first discovered she could do so five years ago. That time, her father banished her. This time, she brings even more trouble upon herself.

People are now hunting Charlie all over London, but only one man succeeds in capturing her.

Lincoln Fitzroy is the mysterious head of a secret organization on the trail of a madman who needs a necromancer to control his newly “made” creatures. There was only one known necromancer in the world – Charlotte – but now there appears to be two. Lincoln captures the willful Charlie in the hopes the boy will lead him to Charlotte. But what happens when he discovers the boy is in fact the young woman he’s been searching for all along? And will she agree to work for the man who held her against her will, and for an organization she doesn’t trust?

Because Lincoln and his ministry might be just as dangerous as the madman they’re hunting.

Review:
Oh my goodness, this book is fantastic and almost impossible to set down once you’ve started.  Transported back to Victorian England, this book starts and ends with action packed adventures.  Charlie does what has to be done in order to survive, even if she finds it scary, even if she doesn’t necessarily want to, until she’s thrust into a completely new order of people who might understand.  Charlie is faced with trying to find herself among the facade she’s built, and learning that what some might see as monstrous makes her different but not necessarily evil.  As Charlie has to fight to figure out who she really is she is also faced with a daunting choice of who she should rely on and trust, having to hope she’s made the right decision.

Author Biography: (From Amazon)
C.J. Archer has loved history and books for as long as she can remember and feels fortunate that she found a way to combine the two. She has at various times worked as a librarian, IT support person and technical writer but in her heart has always been a fiction writer. While she has written historical romance in the past, she now writes exclusively in the historical fantasy genre (with a large dose of romance). She has several series which occur in the same Victorian-era “world”, one after the other. Each series can be read alone, but it’s more fun to start at the beginning with THE EMILY CHAMBERS SPIRIT MEDIUM TRILOGY. Follow that up with all 9 FREAK HOUSE books, then the MINISTRY OF CURIOSITIES series. GLASS AND STEELE, her newest series, is set in an entirely different alternate Victorian London.