The Seventh Bride
By T. Kingfisher 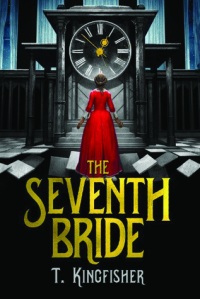 Young Rhea is a miller’s daughter of low birth, so she is understandably surprised when a mysterious nobleman, Lord Crevan, shows up on her doorstep and proposes marriage. Since commoners don’t turn down lords—no matter how sinister they may seem—Rhea is forced to agree to the engagement.

Lord Crevan demands that Rhea visit his remote manor before their wedding. Upon arrival, she discovers that not only was her betrothed married six times before, but his previous wives are all imprisoned in his enchanted castle. Determined not to share their same fate, Rhea asserts her desire for freedom. In answer, Lord Crevan gives Rhea a series of magical tasks to complete, with the threat “Come back before dawn, or else I’ll marry you.”

With time running out and each task more dangerous and bizarre than the last, Rhea must use her resourcefulness, compassion, and bravery to rally the other wives and defeat the sorcerer before he binds her to him forever.

Review:
This story is an unbelievably cute fairy tale in its own right.  Not only does the protagonist have spunk and pizzazz but she also isn’t fooled into thinking she’s in a magical perfect situation after being randomly proposed to by a lord.  Although she cannot refuse, she shows the fear that most fairy tale females lack, and because of that, she uses caution which is generally overlooked by not only the Brothers’ Grimm and Hans Christian Anderson characters, but also by Disney princesses.

From the beginning I saw glimpses of fairy tales.  There was mention of fantasy creatures doing mischievous things, and with a miller’s daughter, it would be hard not to expect Rumpelstiltskin to jump out.  Though there were several fairy tale and fantasy story connections from Rumpelstiltskin to Alice and Wonderland mixed with The Wizard of Oz, this book is a completely novel piece– innovative, imaginative, down to earth and impossible to resist the charm of.  Five stars.

Author Bio: (From Amazon)
T. Kingfisher is the vaguely absurd pen-name of Ursula Vernon, an author from North Carolina. In another life, she writes children’s books and weird comics. She has been nominated for the World Fantasy and the Eisner, and has won the Hugo, Sequoyah, Nebula, Alfie, WSFA, Coyotl and Ursa Major awards, as well as a half-dozen Junior Library Guild selections.

This is the name she uses when writing things for grown-ups. Her work includes multiple fairy-tale retellings and odd little stories about elves and goblins.When she is not writing, she is probably out in the garden, trying to make eye contact with butterflies.

One thought on “Review of The Seventh Bride by T. Kingfisher”