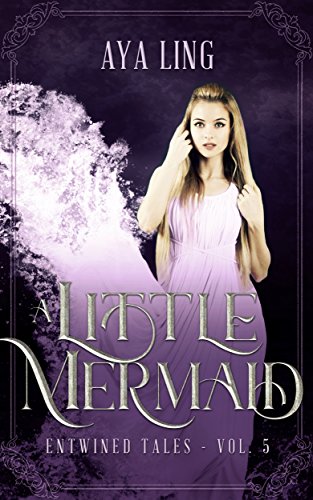 Synopsis (from Amazon):
All Clio wants is to make her crush—a fellow merman prince—notice her. She isn’t interested in the people on land, much less a certain Prince Lukas, who was stupid enough to fall off a ship on his birthday. But when a bumbling fairy godfather misunderstands her, Clio finds herself in the worst situation imaginable—stranded on land with her tail and voice gone.

And her troubles are just beginning. Not only must Clio learn how to behave like a human, but she also needs to discover the identity of a mysterious assassin, all while guarding herself against flirtatious advances from Lukas, the very person she wants to avoid.

A Little Mermaid is a romantic fairy tale novella. It can be read on its own, but is more fun when read as a part of the Entwined Tales, a series of interconnected fairy tales by six different authors. Each story follows the adventures of one of seven children from the same family as they seek out their own happily ever afters in spite of their reluctant fairy-godfather.

Review:
Clio got a wish, but it wasn’t what she had wanted. While she got the opportunity to experience another land, she hadn’t disliked the one she came from. Clio learns to make the best of her situation, trying to learn how to act human, knowing all the while she doesn’t intend to stay that way. Having to find a mysterious assassin gives her a purpose she likely wouldn’t have ever experienced in the merkingdom. Sometimes, what you want isn’t what you need.