Not Cinderella’s Type
By Jenni James 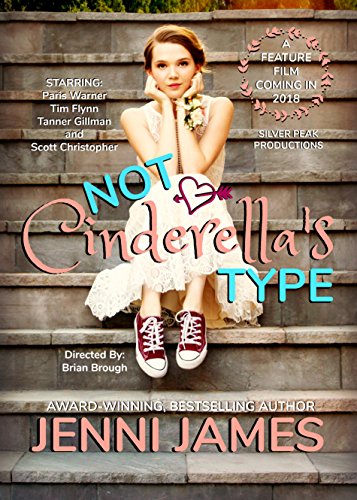 Indy Zimmerman has a new stalker who won’t leave her alone, no matter what she says to him. Never mind the fact that he’s one of the most popular guys at school—she’s positive Bryant Bailey is only trying to appease his own conscience after pretty much destroying her life. But when Bryant doesn’t back down and insists on having some sort of bizarre friendship with her, his magic works, and her walls slowly start to crumble. He’s not her type. She’s never been into guys like Bryant, but then again, she’s never really known anyone quite as stubborn, or caring, or who can get her to confess stuff she wouldn’t even tell her best friend.

Review:
No. Just… no. There wasn’t a lot of depth to this novel, and while the relationship is sweet, the beginning is a bit forced. I did like the twist of HOW Indy becomes “Cindy”, but unfortunately most of the characters are flat and there doesn’t seem to be any motivation behind (at least never shown/seen) what they’ve done. The ending is very expected but sweet.

Author Biography: (From Amazon)
Jenni James is the busy mother of ten kids (7 hers, 3 her hubby’s) and has nearly thirty published book babies. She’s an award-winning, best-selling author, who works full-time from home and dreams about magical things and then writes about what she dreams.

Even though she was born in Arizona, went to high school in New Mexico–and loves Mexican food more than anything–she lived so many years in England that when she and her children finally returned home she couldn’t for the life of her remember how to speak truly American anymore. She gets teased relentlessly on her British accent and connotations–and there are sometimes altogether where she only speaks like a true Englishman for several hours at time without having any idea until someone points it out. Hence the relentless teasing.

Oddly however, when she returns to Britain and no one can tell she’s American, she doesn’t mind it one bit. The weather, the rolling green hills, the incredible architecture, the immaculate cottage gardens, the memories, the many lifelong friends and houses and villages she’s lived in, the balls/galas/parties she hosted while she was there… it’s all a second home to her now and a place that has always and will always capture her heart.

Some of her works include The Jane Austen Diaries (Pride & Popularity, Emmalee, Persuaded…), The Jenni James Faerie Tale Collection (Cinderella, Snow White, Rumplestiltskin, Beauty and the Beast…), the Andy & Annie series for children, Revitalizing Jane: Drowning, My Paranormal Life, Not Cinderella’s Type, and the Austen in Love Series.

When she isn’t writing up a storm, she is chasing her kids around their new cottage and farm in the tops of the southwestern mountains, entertaining friends at home, or kissing her amazingly hunky hubby. Her life is full of laughter, crazy, and sunshine.