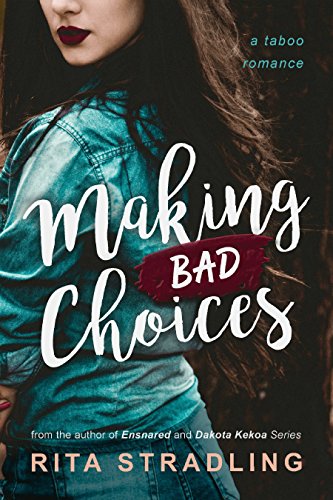 Culter Fuller came back into my life on the day my mother died.

We’d hated each other since childhood. Well, I hated him, and I thought the feeling was mutual. Then when I moved to my dad’s house to finish my last semester of high school, we went from being bitter enemies to . . . something else. He was suddenly everywhere, occupying my space and filling me with thoughts I knew were wrong.

I knew that soon we would cross a line that should never be crossed, a line with very serious consequences.

Because Culter wasn’t just any irresistible boy, Culter Fuller was my stepbrother.
But I have always been very bad at making the right choices.

Review:
There was such hope and potential for this book! So very much of this story fell flat. It was as if the author had an idea but didn’t completely develop it. The characters were flat and one dimensional, the relationships completely loopy. The wording was absolutely atrocious with multiple instances of sentence structure that just doesn’t make sense at all–whether reading or in speech.

Cassie is moving from L.A. to Colorado because her mother died of cancer. She is grieving and misses her–which she should do. However, there was no depth to this and everything felt somewhat ill-conceived. Her friends in L.A. were at the funeral, and we get small snippets of memories of things she did with them, but not once during the entire book when she moves do they contact her or she them.

There is no build up for the relationship between Culter and Cassie. They’re there together, and while there might be some jabs back and forth, there’s nothing preventing them from talking or doing anything together. In essence, while Cassie worries intensely about their “secret” becoming out in the open, there’s really no risk to it–nothing’s at stake, nothing happens.

The drama with her father and Tyler could be seen from the beginning, and it was in no way a surprise, though perhaps his lack of stepping up might be. This also goes for Culter and her father’s relationship– supposedly they don’t get along, but there is never any depth shown to this except the two avoiding each other.

Stradling’s Colorless was a much better developed story, and one I would recommend over this.

If these are topics that are intriguing, that of death/dying and a teen having to deal with it (especially from cancer) I instead recommend the books The Silver Kiss by Annette Curtis Clause and Six Months to Live by Lurlene Daniels.

If one is really into stepsibling romance (and are looking for a romance novel, NOT YA) I would recommend Stepbrother Dearest by Penelope Ward. In some ways, Making Bad Choices seems inspired by this novel, though I Ward’s story is well developed and has a depth that Making Bad Choices doesn’t have.

Author Biography: (From Amazon)
Rita Stradling is the author of The Deception Dance series, the Dakota Kekoa series and The Fourteen Day Soul Detox Novella Serial. She has a BA in Art History and a particular love for modern and medieval art.

Rita lives with her husband and son in Northern California.

She has an insatiable novel addiction and mostly reads young adult and adult: romance, paranormal, urban fantasy and high fantasy.