The Spinner and the Slipper
By Camryn Lockhart 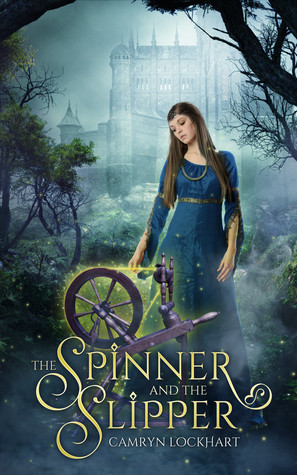 A Romantic Retelling of “Rumpelstiltskin” and “Cinderella.” Eliana, a humble miller’s daughter, never sought the king’s attention. Now her stepmother’s thoughtless lie has placed her in danger, for if Eliana cannot spin a roomful of straw into gold by dawn, the greedy king will order her execution. One glimmer of hope lights this dire situation when a mysterious stranger magically appears in Eliana’s prison cell. A series of bargains might be enough to secure Eliana’s freedom. But unfriendly powers observe the doings of faeries and mortals alike. Can Eliana and her nameless champion surmount the odds piling up against them . . . even the wrath of mighty King Oberon himself?

Review:
One of the absolute best combination fairy tales I have ever read. Eliana lives a relatively normal life, trying to be good and never asking for anything special. When she’s in danger, the mysterious stranger can save her. She wants to understand the stranger and why it is that he might help her, instead of instantly agreeing to the help– not something you see from just any miller’s daughter.

In combining the two stories, I thought it was a really neat approach to do so by adding in the fairy realm, and that of Titania and Oberon. It added a depth, puzzlement, uncertainty, and amusement that isn’t usually seen in fairy tales.

This certainly is a fairy tale of its own and I definitely recommend you read it!

Author Biography: (From Amazon)
There is no information about the author listed.