Girl in the Shadows

Genre: YA Fantasy
Number of Pages: 380

Eighteen-year-old Moira Mitchell grew up in the shadows of Vegas’s stage lights while her father’s career as a magician soared. More than anything, Moira wants to be a magician too, but her father is dead set against her pursuing magic.

When an invitation to join the Cirque American mistakenly falls into Moira’s possession, she takes action. Instead of giving the highly coveted invitation to its intended recipient, Raleigh, her father’s handsome and worldly former apprentice, Moira takes off to join the Cirque. If she can perform alongside its world-famous acts, she knows she’ll be able to convince her dad that magic is her future.

But when Moira arrives, things take on an intensity she can’t control as her stage magic suddenly feels like…real magic. To further distract her, Raleigh shows up none too pleased at Moira’s presence, all while the Cirque’s cocky and intriguing knife thrower, Dez, seems to have it out for her. As tensions mount and Moira’s abilities come into question, she must decide what’s real and what’s an illusion. If she doesn’t sort it out in time, she may forever remain a girl in the shadows.

Review:
I was really excited when I found this book, since I had quite liked Girl on a Wire. While I didn’t hate this book, it wasn’t as amazing as the first in the series. Moira is a likeable protagonist and seems to have a solid plan in place to secure her future in the magic business. While Raleigh appears totally capable and ready to look out for her, given that she doesn’t try to take over his stage, she seems far too easily smitten with Dez.

Dez is too undeveloped, and it’s hard to like him or his connection with Moira, even when you realize just how much is on the line. I found this book a little too two dimensional and the females were too powerless. For the type of energy supposedly there, much of the book seems to be a damsel in distress story, which is the opposite of what the first book in the series was.

Nonetheless, I would read another book if it came out, and do like this author. 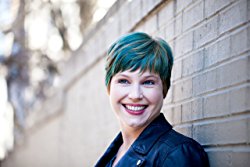 Author Biography: (From Amazon)
Gwenda Bond writes YA and children’s fiction. Her novels include the Lois Lane series (Fallout, Double Down), which bring the iconic comic book character front and center in her own YA novels, and the Cirque American series (Girl on a Wire, Girl Over Paris, Girl in the Shadows), about daredevil heroines who discover magic and mystery lurking under the big top. She and her husband author Christopher Rowe will launch a middle grade series, the Supernormal Sleuthing Service, in 2017, and Lois Lane: Triple Threat will be released.

Her nonfiction writing has appeared in Publishers Weekly, Locus Magazine, the Los Angeles Times, and many other publications. She has an MFA in writing from the Vermont College of Fine Arts. She lives in a hundred-year-old house in Lexington, Kentucky, with her husband and their unruly pets. There are rumors she escaped from a screwball comedy, and she might have a journalism degree because of her childhood love of Lois Lane. She writes a weekly letter you can sign up for at http://www.tinyletter.com/gwenda. Visit her online at http://www.gwendabond.com or @gwenda on Twitter.