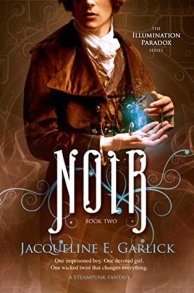 Losing him would make her overcast world one shade darker…

Navigating her way through nightmarish lands devoid of sunlight, Eyelet Elsworth races to free her beloved Urlick Babbit, the first person to understand and accept her—differences and all. Framed for murder and sentenced to execution, Urlick is running out of time. And the Commonwealth’s tyrannical new ruler, Penelope Rapture, is strangely eager to speed up the clock.

Aided by a band of unusual yet loyal associates, Eyelet stumbles upon a startling rumor. And as she unravels a secret that could challenge Penelope’s claim to the throne, Penelope vows to divert Eyelet’s journey—straight to a dark and deadly end.

In Noir, the second thrilling addition to Jacqueline E. Garlick’s Illumination Paradox series, familiar friends struggle against new and old enemies, shocking secrets come to light, and the truth that could save this captivating steampunk world is revealed…if it doesn’t destroy everything first.

Review:
Ever had a book that you couldn’t put down? If you’ve read Lumiere, this will likely be like that. Not only is the reader introduced to other unfortunate people who are far more capable than they are given credit for, but more back story is learned about one of my favourite secondary characters, C. L. While adventuring we also meet a few more unforgettable characters, one named Livinea who I am certain will capture many hearts as she appears to be the embodiment between what people often feel and have to keep private.

I absolutely love the surprise about Urlick, and it wasn’t exactly as I had suspected, but I was quite pleased nonetheless. He seems to take direction well, and while his love for Eyelet is absolute, he does what is necessary for all first.

Now I have to say that the world crafting, the buildings in this particular novel, are genius. Is it magic or is it science? Or is it both? I absolutely love the creativity and medieval inspiration used for the jug and the tortures the characters were threatened with.

While I had an inkling that Eyelet may have contracted a particularly nasty disease because she keeps coughing up blood, I was still devastated by the abrupt uncertainty of the ending, and of course will start book 3 post haste. 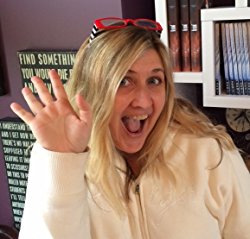 Author Biography: (From Amazon)
Jacqueline Garlick is the author of the immensely popular, young adult, steampunk/fantasy series THE ILLUMINATION PARADOX, as well the IF ONLY series, a contemporary, coming of age, romantic mystery. She is also the author of a variety of women’s classic romances including the highly anticipated, upcoming HEARTMENDER’S SOCIETY.

Jacqueline loves strong heroines, despises whiny sidekicks and adores a good story about a triumphant underdog. (But then again, doesn’t everyone?) She has an on-going love/hate relationship with chocolate, grammar, and technology. Jacqueline has been a teacher, professional speaker, and environmental activist, but much prefers her current role as mild manner novelist. To find out more about Jacqueline and to be the first to learn of her upcoming releases, book-related giveaways, and other cool contests and events, sign up for Jacqueline’s NEWSLETTER via jacquelinegarlick.com, to join Jacqueline’s elite Reader’s Group and receive an exclusive FREE READ.

One thought on “Review of Noir by Jacqueline Garlick”