The Rubber Band
A Nero Wolf Mystery (3)
By Rex Stout

What do a Wild West lynching and a respected English nobleman have in common? On the surface, absolutely nothing. But when a young woman hires his services, it becomes Nero Wolfe’s job to look deeper and find the connection. A forty-year-old pact, a five-thousand-mile search, and a million-dollar murder are all linked to an international scandal that could rebound on the great detective and his partner, Archie, with fatal abruptness.

Review:
Having recently binge watched all of A Nero Wolfe Mystery I have to say, it’s quite easy to picture the characters as the actors– and that’s the only good way to picture them, in my book.

There is very little that can be said without giving away a plot. All of the characters were well done. Mr. Wolfe does an excellent job of protecting his client, and offering help but not forcing it on others. I was pleasantly surprised that I figured out the mystery before Mr. Wolfe revealed it, though I didn’t know as fast as he did, and I hadn’t known for sure which individual it was before he revealed it. Quite well done! I can’t wait to read more! 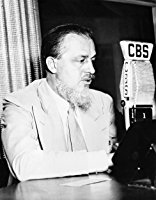 Author Biography:
Rex Todhunter Stout (/staʊt/; December 1, 1886 – October 27, 1975) was an American writer noted for his detective fiction, particularly the 33 novels and about 40 novellas that featured the detective Nero Wolfe and his assistant Archie Goodwin between 1934 and 1975.

In addition to writing fiction, Stout was a prominent public intellectual for decades. Stout was active in the early years of the American Civil Liberties Union and a founder of the Vanguard Press. He served as head of the Writers’ War Board during World War II, became a radio celebrity through his numerous broadcasts, and was later active in promoting world federalism. He was the long-time president of the Authors Guild, during which he sought to benefit authors by lobbying for reform of the domestic and international copyright laws,[specify] and served a term as president of the Mystery Writers of America.
Bio from Wikipedia, the free encyclopedia. Photo by CBS Radio and photographer uncredited [Public domain], via Wikimedia Commons