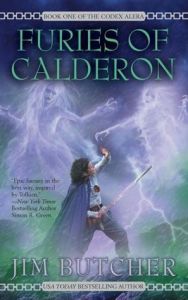 For a thousand years, the people of Alera have united against the aggressive and threatening races that inhabit the world, using their unique bond with the furies – elementals of earth, air, fire, water, and metal. But now, Gaius Sextus, First Lord of Alera, grows old and lacks an heir. Ambitious High Lords plot and maneuver to place their Houses in positions of power, and a war of succession looms on the horizon.” “Far from city politics in the Calderon Valley, the boy Tavi struggles with his lack of furycrafting. At fifteen, he has no wind fury to help him fly, no fire fury to light his lamps. Yet as the Alerans’ most savage enemy – the Marat – return to the Valley, he will discover that his destiny is much greater than he could ever imagine.” Caught in a storm of deadly wind furies, Tavi saves the life of a runaway slave named Amara. But she is actually a spy for Gaius Sextus, sent to the Valley to gather intelligence on traitors to the Crown, who may be in league with the barbaric Marat horde. And when the Valley erupts in chaos – when rebels war with loyalists and furies clash with furies – Amara will find Tavi’s courage and resourcefulness to be a power greater than any fury – one that could turn the tides of war.

Review:
This book was recommended to me by a great friend, Maria Picone of Sky Tango Freelance, who knew that I had read The Dresden Files and felt that I was missing out.  Cheers, Maria– you were totally correct.  This book is AMAZING.  I don’t want to be disloyal to my love of The Dresden Files, and my love for The Dresden Files hasn’t changed, but this book is on a completely different level and comparing the two would be like comparing apples to oranges.

There is not a single character that does not have a purpose, who has no definition, or redeeming qualities.  I cared just as much about seeing what happened to the antagonistic characters as I did the protagonists.  Everything is explained incredibly well, in ways that made sense and helped draw a reader further into the book.  The furies originally made me think a bit of the daemons in Philip Pullman’s The Golden Compass, but furies are unique individuals, and though they are connected to the characters they are not part of a whole.  Although the novel appeared from multiple standpoints this didn’t cause any sort of disconnect from chapter to chapter.  There were times when I desperately wanted to be following one part of the story, but was just as easily drawn into the happenings of another character.

While this book is quite lengthy, I found it to be hard to set down, and perfect.  While this adventure appears to be concluded, with all of the loose ends tied up, there are many ways that the series could continue after this particular title.  I have some speculations in regards to how some of these characters may be connected and I intend to keep note of them, though I believe whether or not my conjectures are correct will be shown, in time.

I cannot say enough about this book, and I cannot wait to read more!  Way to go, Jim Butcher.  Way to go!

Information:
The Dresden Files are the first books that Jim Butcher managed to get published.  He is also the author of the Codex Alera, and a new steampunk series, Cinder spires.  He is a gamer, including tabletop, video games, as well as LARP.  He still lives in his hometown, Independence, Missouri.

For a detailed biography of Jim Butcher, and a way to purchase his books, see his Amazon page.

If you like this review, and the writing style of this quirky reviewer, please consider visiting and liking my Facebook author page: Lizzy March.